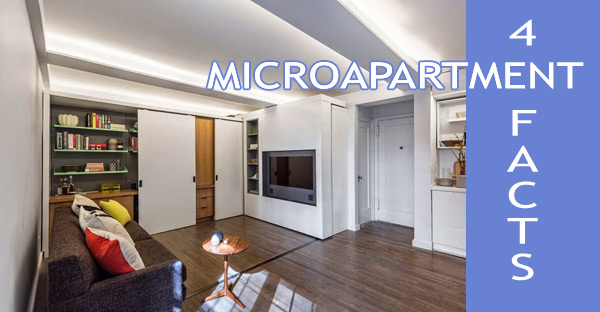 As microapartments are becoming a popular real estate option, real estate agents should keep a close eye on this growing trend for 2016. To get acquainted with this housing type, here are four fascinating facts behind the innovative invention.

FACT #1: Microapartments first originated in Japan in the 1970s.

Cutting-edge as the microapartment may seem, the pint-sized dwelling concept actually started over 40 years ago in Tokyo, Japan. In 1972, the Nakagin Capsule Tower opened for business and accommodated 140 compartmental units for office professional singles at just over 100 square feet per unit. Since then, the building has fallen into disrepair, and only 20 units are rented year-round, but the tiny living trend has taken off. Microapartments are currently thriving in Sydney and Melbourne, and construction for them has begun in Beijing and other large Chinese cities where space is rare and valuable.

FACT #2: The microapartment trend picked up in the United States during the 2008 recession.

As more homeowners and renters felt the recession’s financial impact, modesty and housing affordability became the primary emphases. Microapartments naturally fulfilled those requirements without sacrificing quality of lifestyle. While these spaces are marketed to young singles and retired seniors, family units are now cropping up and could become an emerging trend to watch.

FACT #3: America’s first indoor shopping mall has been transformed into a microapartment complex.

Built in 1828, the Providence Arcade in Rhode Island boasts a beautiful Greco-Roman facade and has been a dynamic financial, merchant and cultural center in America for nearly 200 years. This historical shopping mall was registered as a national historic landmark in 1976. In 2008, the building closed down, as its three floors of retail shops couldn’t keep afloat during the recession. Then, in 2013, Providence Arcade transformed, reopening as a single floor of shops with a two-floor complex of 225- to 800-square-foot microapartments. How successful are these tiny abodes? Let’s just say there’s a year-round waiting list working 24/7.

FACT #4: Microapartments feature three- and six-month leases along with annual ones.

An interesting, little-known fact is that tenants can rent out microapartments for terms as short as six or even three months, depending on the complex, making them ideal launching pads for new residents trying out the area. It’s convenient for business professionals on extended stays and college students, who often work around these types of time frames in their semesters.