Should MLSs Be Playing The Role Of King Makers? 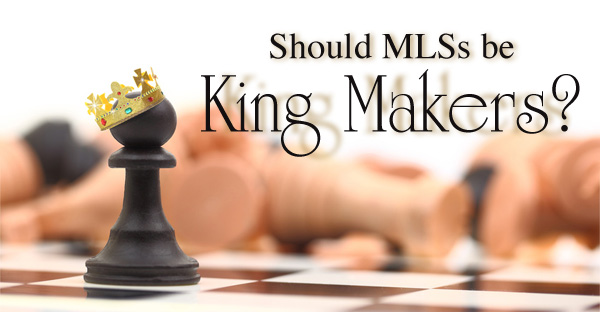 Most real estate agents don’t realize — or perhaps don’t remember — that not long ago, there were many real estate portal startups, but all the ones that try to comply with each MLS’s (Multiple Listing Service)  and NAR’s (National Association of Realtors) rules failed — except Realtor.com, of course. Trulia and Zillow can only dominate this space because they went around the MLSs, while the MLSs and NAR were putting all of their efforts into crowning Realtor.com as king.

Most real estate agents rely on a website vendor like Zealder to host their IDX (Internet Data Exchange) website. But these vendors have to accept what is sometimes a 12-page contract agreement with each MLS (Multiple Listing Service) to provide this service. Some of the requirements of these contracts are counterproductive to the purpose of having an IDX website. For example:

Other than these MLSs beating on their chest to show that they are the masters of listing data, there is little purpose to many of these requirements. Now, these requirements would be tolerable if all vendors were required to play by the same rules, but even that’s not true. For example:

While there’s a lot of blame to go around, the fact remains that Trulia and Zillow have cornered the real estate market and have wedged themselves between brokers and home buyers.

Arguably, the first blow came from the MLSs and the National Association of Realtors. The situation is similar to the web technology field. Old companies with their traditional mindset and ways of doing things have always had a hard time transitioning to doing business online. New companies that start out as “web first” companies don’t have to carry old baggage with them from a pre-online period. This is why, in the early 90s, Disney’s go.com, Microsoft’s msn.com, and countless other old media companies were unable to compete with Yahoo! Ironically, just a few years later, it’s partly the same reason why Yahoo!, after hiring an old media CEO, was unable to compete with Google. It’s also why newspapers could not compete with job portals like Monster.com and Craigslist. It’s also why Walmart, Barnes and Noble, and many other businesses cannot compete with Amazon.com.

Now that MLSs are planning to develop their own real estate portals and lead generating sites, it’s easy to see how it will be a disastrous mistake that further rewards organizations that avoid MLSs altogether.

One thing should be made very clear — this article is not talking about all MLSs. In fact, most MLSs are honest and fair companies that are superb at what they do and genuinely serve the needs of their clients.

At Zealder, we’ve always believed that MLSs will continue to play a vital role in the future of real estate technology. But they should be doing more to aggregate the data that they possess on a level playing field, which is where their business primarily thrives. They should not be playing king makers. Take Google, for example — their business model is to provide access to the world’s information without showing partiality to any one entity, no matter how deep its pockets may be. As a result of this, companies that provide great products and services, those that draw many users’ attention and mentions, will thrive.

We propose that all MLSs move to RETS (Real Estate Standards Transactions), simplify their requirements, and drop their IDX licensing fees. Some may view this as outrageous, but examine the possibility further and it becomes quite rational.

Some MLSs will complain that there is a cost to host and maintain the IDX service, but that simply should be part of the cost of doing business. Facebook profiles cost a lot more to host and maintain, but they could not pass that cost over to their user base without a justifiable uproar. RETS, when implemented properly, eliminate a lot of the maintenance and support issues. By making these changes, MLSs will be removing the hurdles agents have to jump over to be competitive, dissolving the advantages that Trulia and Zillow have gained from avoiding the MLSs for so many years.

What do you think, should MLSs be playing the role of king makers?